Dwelling in the World

Dwelling in the WORLD is the habit of paying attention to the people of peace that we meet each day.

Dwelling in the World is paying attention to those people God places on  our path.

A church in southwest Philadelphia had decided to try an experiment as part of their Partnership for Mission Church process. They were going to collect care packages for military personnel at a local park, in order to “get outside their building”. Two significant things happened as part of their experiment.

First, their copier broke and they needed to go to a local printer to have flyers printed. The man behind the counter was so excited to hear about their project. He had been praying for ways to do something for those where were serving and these people, who just happened to walk through his door, was the  answer to his prayer.  The group from the church were shocked and amazed by the greeting they received. They had never thought there might be partners in ministry at the local printer.

Second, they were successful in collecting items and money for shipping 60 boxes to service men and women.  But that was not the significant part.  They were not successful in connecting to the many people who came with gifts for their project. They didn’t get names or addresses or even have conversations with the people. They had missed the opportunity to connect to the people of peace that God had placed in front of them. The significant thing was they learned from that missed opportunity. The next experiment they were intentional about connecting and meeting the people in their neighborhood.

Who are the people of peace that you meet in your neighborhood? Who are the partners that God has placed on your path? Do you need to change your path to meet those people?  Have you already met them?

Dwelling the World is developing the habit of paying attention to the people of Peace ( Luke 10:5 -6) and connecting with them in ways that demonstrates and lives out the Gospel of Jesus Christ.

Learn more about the Missional Practices. 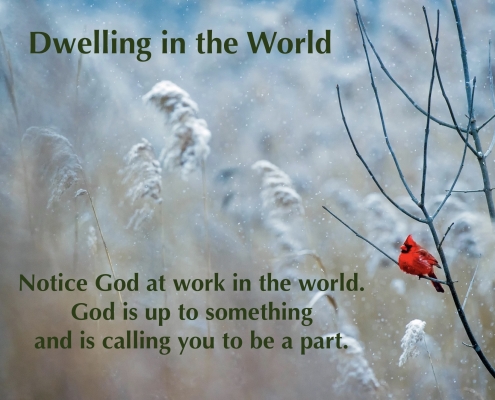 Grace Before Meals
Scroll to top