In response to the recent incident of white supremacist terror, committed by a man with a clearly articulated anti immigrant agenda, in the form of a mass shooting at a Walmart in El Paso, Texas,  Jill Duffield, editor of the Presbyterian Outlook, offered a beautiful prayer to congregations which concluded with the following words “Grant courage to your people that we may not just say enough, but do all we can and everything required to stop the killing in our streets.” The whole prayer can be found here https://pres-outlook.org/2019/08/prayer-for-el-paso/

Before the virtual ink had even dried on the prayer another mass shooting took place in Dayton, Ohio…

The motive of this second shooter was less clear, but he was well-known by friends and family to have been fascinated by violence and to have kept a “hit list” of classmates he wanted to harm or kill.

In both cases the shooters were able to access guns and, in both cases, warning signs were missed or ignored.

It is time for us to find our courage and as Jill prayed to do everything we can to stop the killing.

This may include learning about gun violence and advocating for change which limits access to such efficient tools of death.

The Presbyterian Mission Agency has curated some resources here: https://www.presbyterianmission.org/ministries/peacemaking/gun-violence-resources/ which include actions and papers adopted by the 2010 and 2014 General Assemblies addressing gun violence as well as books and video links to help churches and individuals engage in study.

Some suggest that mental illness is a factor in this epidemic of violence, and while data shows that only 4 percent of those who engage in gun violence and 2 percent of those who commit violent crimes of any type have a previous mental health diagnosis, reducing the stigma around mental health treatment and increasing access to care can only help…

The General Assembly has adopted a policy paper on serious mental illness which includes some resources and can be found here. https://www.pcusa.org/resource/comfort-my-people-policty-statement-serious-mental/

In many of the shootings, including the one in El Paso, it is clear that the motivation for the violence is racial in nature. It might be that moving from prayer to action for you includes engaging in intentional anti racists praxis and education.

The PC(USA) curriculum and other resources around Facing Racism can be found here https://facing-racism.pcusa.org

May we pray, with Jill, for an end to the killing, and may we also turn from prayer to action in whichever way we feel God leading us. Amen. 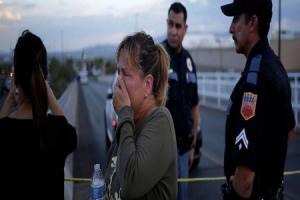 Where do we start? Part 3 – Dwelling in the World
Scroll to top