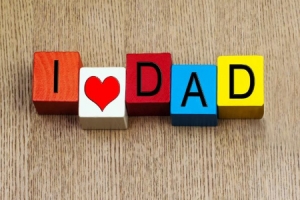 This week let us remember in prayer all those who we call Papa, Pere, Baba, Daddy, Athair, Abba, and other names we use for Dad.

The nation’s first Father’s Day was celebrated June 19, 1910.However it was not until 1972 that Father’s Day became a nationwide holiday in the United States.

Though the first observation of Father’s Day in Washington State in 1910, the holiday was slow to catch on in other parts of the country.  When World War II began, advertisers argued that celebrating Father’s Day was a way to honor the American troops and support the war effort.  By the end of the war the holiday had gained a place in the American culture.

In 1972 President Richard Nixon signed a proclamation that Father’s Day was a federal holiday.

We pray for young fathers, who are learning what it means to be a Dad. May they find courage, balance of work and family life and determination to be the best Dad that they may be.

On this day we remember the Father’s who struggle to care for their children. For those who have to parent alone or have to be away from the children in order to provide for their futures. We pray for Fathers whose children are lost or suffering. May they know that God walks with them in their time of bewilderment, loss and grief.

We pray for those who are not Fathers but have been a light in our lives, a mentor and guide.

We remember fathers, grandfathers, mentors who are no longer with us but who live in our memory and continue to nourish and guide us with their love.

We pray for Dads everywhere. In Jesus name, Amen.

The Pulse of Generosity:Vital signs of a Healthy Steward
Scroll to top