Where do we start? The Practice of Announcing the Kingdom of God 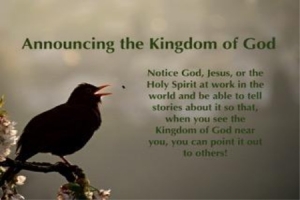 Episcopal Bishop Gordon Scruton told the story of when Desmond Tutu visited his diocese in Western Massachusetts. Many local dignitaries were present for a dinner to help a local school for under-privilege children. When the Archbishop rose, he lauded the community leaders for the work that was being done for the poor in the community. He said, “God sees what you are doing here and smiles because it is very close to his heart”. The effect was staggering. Those where were reluctant supporters were now eager participants. They too now could see the presence of God in their midst.

The Practice of Announcing the Kingdom of God has some very simple steps.

The practice is both a community practice or habit and individual habit or practice. There are many activities within your work together as a congregation where you can point or look back and see that this is or was the Kingdom of God coming near or even being in the midst.

The Coming of God’s Kingdom in a Maine Kitchen

I had received a call from my uncle that my grandmother (90 years old) was moving into hospice care for congestive heart failure. A few days later I drove from Philadelphia to Cape Cod to drop off a friend to Bangor, Maine all in one day. Early the next morning I drove the final hour to my grandmother’s house in Dover-Foxcroft to find a driveway full of cars.

My grandmother had a difficult night and the full strength of the hospice staff was present. Knowing my grandmother, she probably demanded that they all be there.  The staff was excited to see me in hopes that I would take their side in convincing her to go to the hospital for symptom management.

My grandfather (91 years old) was visibility distressed about my grandmother’s breathing difficulty and was unable to participate fully in the conversation. My grandmother was being stubborn about taking morphine that would provide relief. (We discovered later that she had been removing her morphine patches and sticking them on the tissue boxes next to her bed and chair). The hospice staff was trying to responsibly and patiently  convince my grandmother to go to the hospital. Needless to say, this was not a peaceful scene. 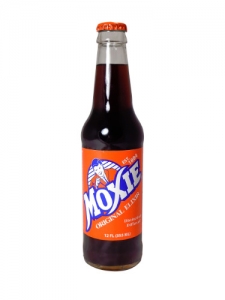 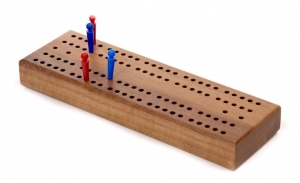 We came back to the house, where they had lived for 56 years and the place that I had only known as “Nana and Bumper’s”. My grandmother was not ready to receive visitors and my grandfather needed to relax so we had our lunch and then spent the early afternoon playing several games of cribbage. We broke out my grandfather’s favorite snacks of Bismarcks and Moxie

There came a quiet moment as my grandfather was counting out his hand that I knew that this would be the last time I would play cribbage with him. He had taught me to play when I was 10. It was just the two of us sitting at the kitchen table playing cribbage, gossiping about my sisters and cousins, like we had done for so many years.

It is not always easy seeing the coming of the Kingdom of God in our midst. Sometimes it takes time to reflect on where God is active in our lives and then to share that story.

We do need to pay attention, to share what we see, to reflect on our experience and give thanks for God’s presence in the chaos and in the quiet moments.

Prayer for Pentecost
Scroll to top